Tightening global supplies have proved bullish for the commodity this year, with U.S. West Texas Intermediate crude prices currently hovering near five-month highs. But the upward action has also been quite volatile, as economic and geopolitical factors have wielded increasing influence over prices.

And if you ask Yamada, who runs Yamada Technical Research Advisors, oil prices are facing some serious resistance that can’t be topped without similarly strong support.

At the same time, crude is bumping up against resistance at the $64 level, which it failed to hold in Friday’s session.

“So far, oil has achieved our first target of $63 and, at the moment, it’s gone through the 200-day moving average, which is a plus,” Yamada acknowledged. “But it’s headed up into this 2018 resistance level — that’s almost a yearlong resistance — so I would suspect that we get a little consolidation. It could pull back toward the 200-day [at] $61.60.” 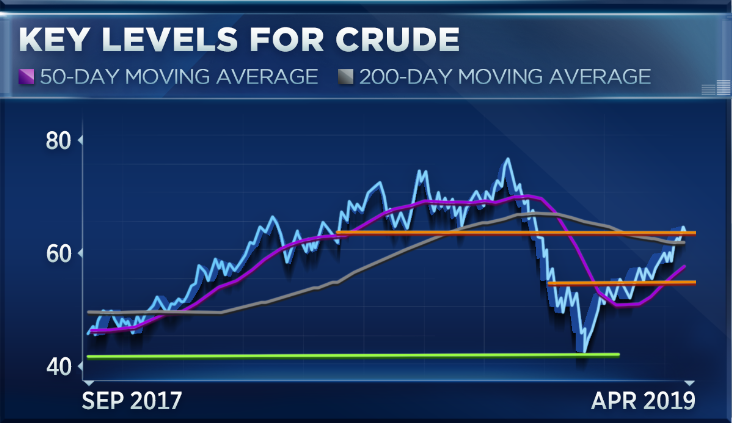 “We have an outstanding target at $70” if those two things happen, she said. “But our real concern here was the resistance around $63, $64. So we want to see how it negotiates that level. We did have a nice positive divergence in the daily momentum back in December, suggesting that the low that we saw was a reversal, which we got. […] So this may be a resting point before, and if, prices go higher.”

And while crude’s daily and weekly momentum indicators are still positive, “it’s the monthly that concerns us,” Yamada warned. “It’s close, but has not moved into a positive position. If it did, then I think, possibly, you could see it move higher. But at the moment I think it’s due for a little bit of a rest.”

WTI crude oil prices ended Friday’s trading session fairly flat, up less than half of 1%. On Thursday, RBC Capital Markets raised its 2019 forecast for international Brent crude, the global benchmark, to $75 and forecast bouts of $80 crude throughout the summer.

Bank of America beats analysts’ profit estimate on rebound in bond-trading revenue
NBCUniversal revealed a critical number about Peacock that shows why media companies are walking slowly into streaming
Index boss warns investors will underperform ‘dramatically’ if they ignore sustainable criteria
Why some life insurance could prove risky for consumers
The student debt squeeze: A look at 3 people’s budgets