Traders in the fed funds futures market made bets in record numbers this week, with the bulk of the money looking for the central bank to cut interest rates aggressively in the months ahead.

Trading volume soared to 1,293,459 million contracts Wednesday, the same day the Federal Open Market Committee voted 9-1 to keep its benchmark interest rate in a target range between 2.25% and 2.5%. However, the post-meeting statement and forecasting materials pointed to a possible cut ahead and traders cemented positions.

Traders already had been expressing strong conviction the Fed would be easing at future meetings, but that sentiment got even stronger following the meeting. The market now sees a 100% chance of a rate cut at the July 30-31 meeting, up from 85% a week ago and just 15% a month ago. For the full year, the expectation for three cuts is 66%, up from 59% a week ago and a mere 4% last month.

The record Wednesday was part of bustling week at the CME, the principal forum for traders who look to peg where the Fed is heading next with rates. Market participants watch the trading activity, and the CME’s probability calculations on its FedWatch tool, for indications of how traders see the likelihood of Fed rate moves.

Fed days, or when the central bank concludes its traditionally two-day policy meetings, generally fetch big activity at the CME, but this year has been even more pronounced. Typical volume on Fed days this year has seen 724,450 contracts traded, or 104% more than the normal day and 54% more than a year ago. 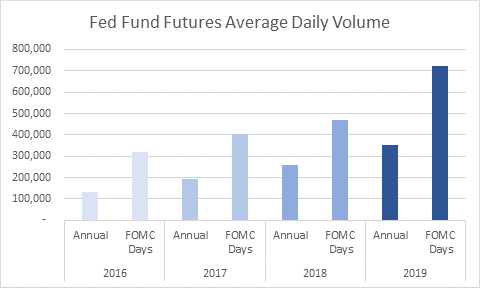 This week’s volume was tracking above 3.5 million contracts as of mid-afternoon Friday, easily outpacing the best week ever back in May 2018, which had held the biggest single-day record at 1.19 million contracts.

The fed funds futures market is often derided as an inaccurate barometer of what to expect from the Fed because it is considered thinly traded and relatively illiquid. However, the big volumes of late challenge that idea.