Elisha Bokman has been out of school for eight years. Still, her student loan balance is half a million dollars.

Today, for her doctorate degree in naturopathic medicine and master’s in acupuncture from Bastyr University, she owes $499,322.69.

She and her husband struggled to buy a house because of her debt. Eventually, the financial stress led them to a divorce. “He felt like he couldn’t live his life or do the things he wanted to do,” Bokman, 38, said. She wanted to open her own medical practice, but she said her student debt prevents her from getting a business loan.

“It really effects the remainder of your life,” Bokman said. “There’s no out.”

Recently, Democratic presidential candidates Elizabeth Warren and Bernie Sanders have proposed forgiving student debt. Warren’s plan would reduce people’s tabs by up to $50,000, whereas Sanders’ would erase it all. 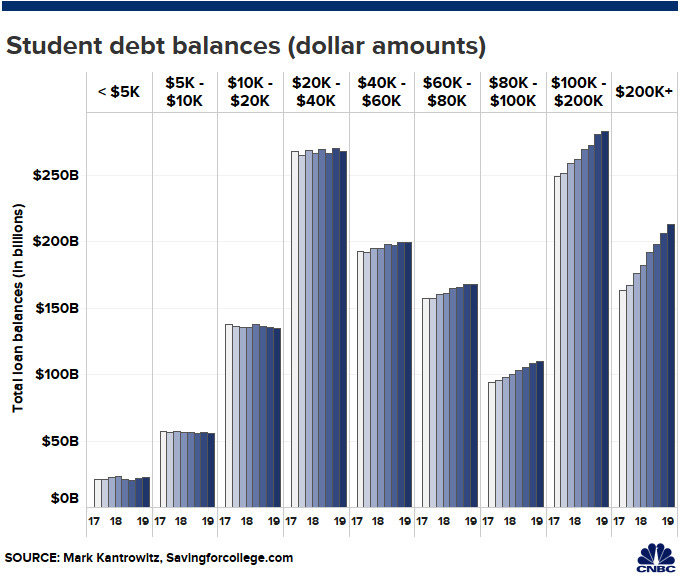 Rebecca Grable loves her job as a pharmacy manager at Walgreens. But to study at the University of Oklahoma to become a doctor of pharmacy, she borrowed more than $310,000, and said the debt has limited her options. A few years ago, when she tried to buy a car, she said, more than 11 banks denied her a loan.

Balancing other bills is a challenge. “I just never imagined being a professional who still lives paycheck to paycheck,” she said.

Rebecca Grable, a pharmacist, owes more than $350,000 in student loans.

Borrowers with huge balances should make a budget to get their spending under control, Kantrowitz said: “It’s a good idea to assign each expense to a category like ‘need’ versus ‘want.'”

Then he suggests paying off your loans with the highest interest rates first, to save money in the long run.

“The name of the game is paying the least amount over time,” said Betsy Mayotte, the president of The Institute of Student Loan Advisors, a nonprofit that helps student loan borrowers with free advice and dispute resolution.

At studentloans.gov, she said, you can figure out the best repayment plan for you. For example, income-driven repayment plans cap your monthly bill at a portion of your earnings.

More from Personal Finance:
Housing prices still haven’t recovered in these markets
You don’t have to be rich to get good financial advice
Many high schoolers don’t understand college financial aid

“This tool not only tells you what your payment will be under each repayment plan — but how much you would pay over time and whether anything would be forgiven,” Mayotte said.

Forgiven student loan debt is considered taxable income, so Mayotte recommends putting aside money for that eventual bill. “If the tax owed is unaffordable, the IRS offers payment plans,” she said, adding that, in some cases, the amount owed is even forgiven.

The IRS also allows student loan borrowers to deduct up to $2,500 a year from their taxable income.﻿

Netflix paints a happy face on growing threat of US competition
Analysts raise Apple price targets but warn inflated expectations ‘may make the music stop’
Here’s where most Americans are really getting their retirement income
Bernie Sanders’ wealth tax would raise $1 trillion less than he estimates, Wharton study shows
Meghan and Harry can flee to Canada but they will still owe taxes in the US