Those in search of a real-time, market-based way to make money on the possibility that Sen. Elizabeth Warren wins the Democratic nomination need look no further than one of the market’s biggest health care funds, according to a Jefferies analysis.

In other words, big health care stocks have underperformed the broader stock market to a greater degree since May whenever investors believed Warren’s odds of nomination are rising. 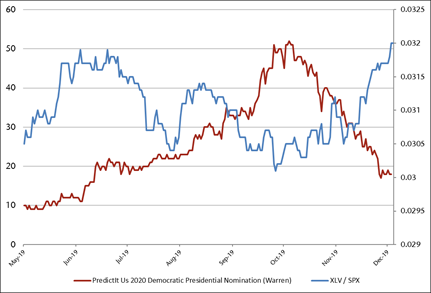 “We have sent this chart out several times subsequent to the Summer months and this most recent version illustrates how well Healthcare (XLV) has done vs. the S&P over the past couple months,” wrote Jefferies’ Jared Holz.

The fund has underperformed the broader market for much of 2019 with a rally of just 15.3%; it trails the S&P 500’s 24% gain since January. In fact, health care stocks have been among the worst-performing sectors this year, rising just 6.8% over the last 12 months compared to the market’s 15.1%.

Though health care has long been the savvy stock picker’s choice in times of economic turbulence, the sector is also subject to changing political whims and is one of the most-regulated industries on the market. So when the 2018 midterm elections resulted in a split Congress, the few areas of bipartisan harmony — including mutual distrust of health insurers and big pharma — took center stage.

And while both Democrats and Republicans have supported crackdowns in the industry, both Warren and presidential rival Bernie Sanders have upped the ante with promises to combat health insurers and introduce Medicare for All policies.

So Jefferies’ Holz wasn’t necessarily surprised to see the health care ETF’s improved performance over the last two months as Warren’s polling and odds declined over October and November. The Massachusetts Democrat is now polling in third place behind former Vice President Joe Biden and Vermont Senator Bernie Sanders, according to data from RealClearPolitics.com.

“One element of our much more bullish view of the sector has been predicated on the fact that Elizabeth Warren skating through the next 6-9 months and becoming the Democratic Presidential Candidate became far too consensus,” Holz continued.

“Meanwhile, we believe much could happen between then (mid/late October) and call it second quarter into third quarter of 2020,” he wrote. “The past six or so weeks have seen a prominent reversal in Warren’s momentum and a corresponding ascent of the XLV as well as more sector-specific indices.”

JP Morgan earnings crush analysts’ estimates as bond trading revenue surges by nearly 90%
Stocks are the most overvalued since at least the 1980s based on one measure
Powerade is launching 2 new product lines as consumer exercise habits change
Billionaires have more wealth than 60% of the global population, Oxfam says
The secret to multiplying your savings